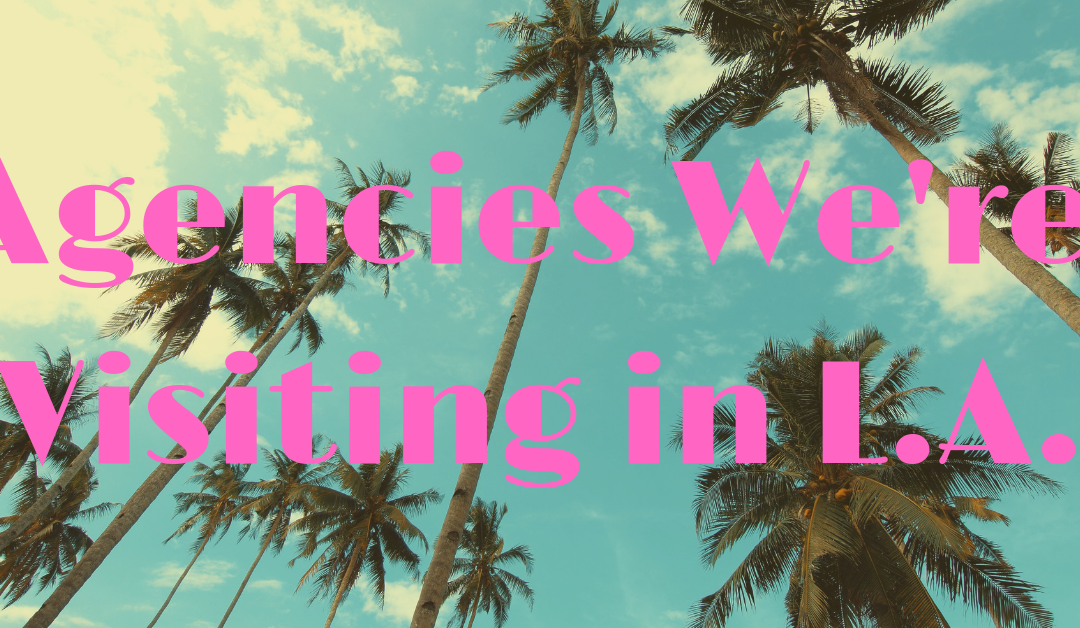 Several lucky Ad Society members will be visiting Los Angeles this week, touring six incredible agencies. Read about the agencies we’ll be visiting and check out the work they produce!

This agency is branch of TBWA Worldwide. TBWA and Chiat/Day were merged in 1995, having offices in Los Angeles, Mexico City, Nashville, and New York City. The Los Angeles office is currently lead by branch president, Erin Riley. This agency has produced notable campaigns through the years. Some well-known ones are the introduction of Macintosh in 1848, the Taco Bell chihuahua, Pets.com sock pocket, and the “Think Different’ campaign from 1997.

72andSunny was founded in 2004 by John Boiler, Glenn Cole, and Robert Nakata. Boiler is currently the CEO while Cole is chief creative officer and Nakata is design director. The agency has offices in Los Angeles, Amsterdam, and New York City. Back in 2010 they became a subsidiary of MDC Partners Inc. This agency was named “Agency of the Year” in both 2013 and 2014 by Adweek and Advertising Age. They are widely credited and known for assisting in the overtake of Samsung over Apple in cell phone sales.

Team One is an advertising agency that was founded back in 1987 in the city of El Segundo. They remained there until 2014 when they moved their office to Los Angeles. This agency has over 400 offices, some located in New York, Chicago, and Atlanta. Julie Michael is the current president of the agency and has been with the company since 1998. Some of the agency’s notable clients are The Ritz Carlton, Lexus, and Haagan Daz. Here are some advertising campaigns that have awarded the company with awards and recognition: “December to Remember” ads for Lexus (2014), ”Six-word wows” for The Ritz-Carlton (2014), 1000 video ads for Facebook campaign (2015), and Trailer for 2K Games Evolve (2015).

Deutsch is a multi-disciplinary marketing communications agency that was founded in 1969 and headquartered in New York City. The company opened its Los Angeles office in 1995. Mike Sheldon is the current CEO of the North American offices and has held the position since January of 2017. The company has head several milestones over the years like establishing the DLatino practice to focus on Hispanic marketing, DeutschMusic a branded entertainment department, and Great Machine to practice artificial intelligence in advertising. Notable campaigns that this agency has produced are: IKEA commercial depicting identifiable gay characters, “The Force” commercial for Volkswagen (2011), and the first live commercial during the Grammys for Target.

This agency was founded in Frankfurt in the year 1982 and now has eight offices across Europe and the United States. Their website states that their employees have “entrepreneurship spirit.” Something unique about this agency is that they house their own barber shop, Malayerba. Along with that they also have their own chocolate brands, animation studio, sneaker media company, and classic car garages. This not only makes the agency stand out, but gives the upper hand on understanding certain challenges that clients may face. Some notable clients they produce work for are Redbull, Wise, and La Virgen Cerveza Pura.

This creative, full-service advertising agency was founded back in 1999. They started out with a small amount of employees and just one client. This agency strives to understand the consumer, devoting a lot of time into client research and strategy. This results in having ideas that are more “human” compared to other agencies. This agency has taken home CLIOs, D&ADs, ADCs, and Cannes for their campaign work. Some of their notable clients are Kia, HBO, Universal Studios Hollywood, and Vizio.