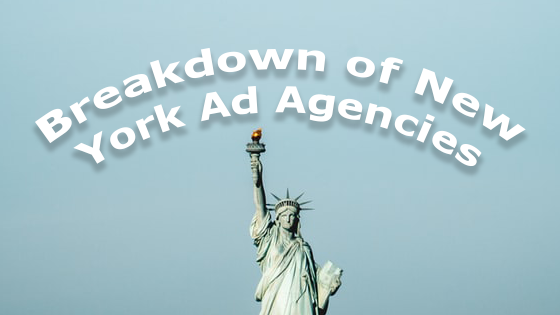 From October 16th to October 18th, Ad Society will be touring six ad agencies throughout New York City. Whether you are on the trip or not visiting, learn more about these agencies and what makes each of them unique.

Just do it. If you can recognize that Nike slogan, thank Wieden+Kennedy for coming up with it. The widely acclaimed creative company provides a range of services to their clients, from media planning/buying to creative. Besides the New York office established in 1995, W+K offices are all around the world. From Amsterdam to Toyko, W+K prides itself in its top-notch service as the “largest remaining independent agency”. Clients include Instagram, Lyft, OkCupid and (of course) Nike.

Definition: (noun) deviation or departure from the normal or common order, form, or rule.

Found on the agency’s homepage, Anomaly strives to be not just any “ordinary agency”. With its No. 8 spot on Ad Age’s 2019 A-List and Agency of the Year 2017, Anomaly’s model is working beyond expectations. By rejecting the traditional ad agency structure, the company invests in business strategy, content creation, and consulting. Clients like Booking.com and Petco remark about how working with Anomaly is different compared to other agencies. As CEO of Anomaly’s New York office, Franke Rodriguez puts it, “Every agency says the same shit. We actually mean it.”

With over 2,000 employees spanning across 17 offices, R/GA has a large presence in the ad industry. The agency integrates technology with its clients’ needs for traditional advertising with skilled artistry, such as in the Samsung spot “Billion Color Film”. R/GA’s services include Brand AI and IP, which tie in digital experiences to enhance overall consumer immersion. Clients such as YouTube and Google appreciate R/GA’s dedication to emerging technology and its emphasis on incorporating tech with the agency’s creative pursuits.

Named the Most Creatively Effective Agency Network at the Effies in 2018 and 2019, McCann has been pumping out iconic campaigns since 1912. From Mastercard’s “Priceless” campaign to Coca Cola’s “I’d Like to Buy the World a Coke” spot, McCann’s creativity speaks for itself. The company stays true to its slogan Truth Well Told in all of its work. Other clients include L’oreal Paris, Chick-fil-A, and National Geographic.

Meet Ad Age’s 2017 Small Agency of the Year: Terri & Sandy is a full-service agency based in New York City. Cofounded in 2010 by Terri Meyer and Sandy Greenberg, the independent agency has a slew of clients, such as Disney, Nutella, and Gerber. The attraction stems from the company’s progressive thinking and production. Not only was Terri & Sandy founded by two women, but the cofounders also claim 60 percent of the agency’s upper management are women, a rare occurrence in the male-dominated ad industry. The company emphasizes a strong work culture not only in client projects but within the workplace as well, with their motto: “Go where you’re celebrated, not tolerated.”

Welcome to Firstborn, an independently owned digital agency headquartered in New York City. Their purpose is simple: “Do the work you’d be proud to put in your portfolio.” With an emphasis on design and tech, the agency seeks to bring brands to the modern age to discover their full potential within their target markets. The agency has expanded with the influx of new technology to create rich consumer experiences for its clients, with services such as augmented reality (AR) and app design & development. Named as one of the Best Places to Work by AdAge and Crains, not only is Firstborn innovative, but it also fosters a creative environment its workers thrive in.

Will There Be More Trips?

For those wishing they can visit an ad agency, sit tight. Next semester, Ad Society will be hosting two more trips to tour other agencies. Stepping into your first ad agency is an invaluable experience and we want all of our members to have that experience for themselves. Safe travels to our members visiting New York!