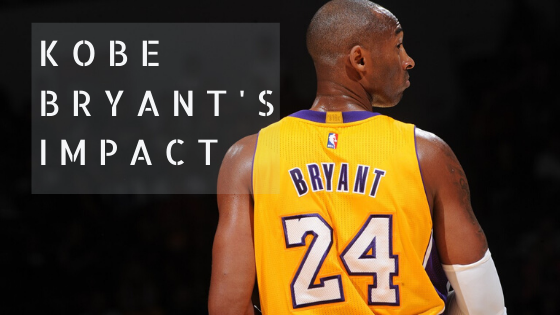 On Sunday morning, a helicopter carrying nine passengers crashed in Calabassas, California. Among these passengers were Kobe Bryant and his 13-year-old daughter Gianna (along with Payton Chester, Sarah Chester, Alyssa Altobelli, John Altobelli, Keri Altobelli, Christina Mauser, and Are Zobayan). This news triggered astonishment around the world. Kobe Bryant was an idol to many. Though fans may not have known him personally, the brand he built for himself made him stand out amongst his peers, and allowed him to be known as one of the most impactful people in the world, from people yelling “Kobe!” as they tossed a crumbled up piece of paper in the trash, to winning an Academy Award for his short film, “Dear Basketball”. All of these things and more, (positive and negative included) contributed to his brand and worldwide fame. In honor of his passing, I want to highlight some of the positive aspects of his brand that led to the revering of him.

One of the most appealing factors about Kobe Bryant was his determination and drive. This could be seen in his “mamba mentality.” This was a term he coined to describe how determined and focused he was on the basketball court. When asked about the origin of the nickname “Black Mamba” in a 2015 interview with Ahmad Rashad, he said, “When I step on that court. I become that. I am that killer snake. I’m stone-cold, man.” Nike highlighted this ideology in its 2013 ad below.

Another aspect of Kobe’s life and brand that made him who he was was the fact that he portrayed a great relationship with kids. He was a very active father to his four daughters. His daughter Gianna very clearly looked up to him and loved the game of basketball, just as he did. This bond they shared was very heartwarming for fans to see. The love he had for his children could be seen through videos of them together, and interviews such as one 2018 interview on a podcast episode of “Barstool Sports,” in which he explains regarding his daughters,  that “every chance I get to see them, to spend time with them — even if it’s 20 minutes in the car — I want that.” Brands were aware of this kid-friendly image Bryant personified from early on his career and they showed it through their advertising, like in the 2001 McDonald’s ad below.

The impact Kobe had on the world can be seen from brands all over the world who respected and admired him. He had worked with a plethora of brands over the years including Nike, McDonald’s, Coca-Cola, Adidas, and much more. These brands paid tribute all over social media, and even brands who had little to no affiliation with the basketball player, such as Merriam-Webster Dictionary, took to Twitter and Instagram to send their condolences.

The adidas family’s hearts are with the families, friends and all those affected by today’s tragedy. Kobe was a true legend that inspired others beyond the boundaries of the game. He will be greatly missed.⁣
⁣
Mamba forever. pic.twitter.com/u6MTnyux9K

Kobe was a legend on the court and just getting started in what would have been just as meaningful a second act. To lose Gianna is even more heartbreaking to us as parents. Michelle and I send love and prayers to Vanessa and the entire Bryant family on an unthinkable day.

The news even led to the postponing of several SuperBowl ads, including Olay, Poptarts, and Mountain Dew. The Super Bowl ad from Planters which was set to show a funeral for Mr. Peanut was also postponed.

The wide impact of Kobe Bryant’s legacy will conceivably live on for generations to come.